Serena at the Champions Ball. Novak Djokovic mentioned after his Wimbledon win that he wanted to have a dance with Serena at the ball. 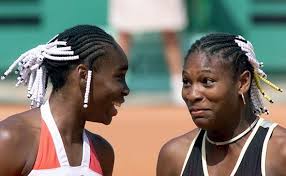 The Williams Sisters when they were little girls primed for taking the tennis world by storm.

Serena and Venus Williams represent everything that America is supposed to be about, “hard work and determination.”  Yet, it is amazing how unpatriotic some Americans are when it comes to celebrating the Williams sisters’ accomplishments and rooting for them in matches against opponents from other countries.   I would NEVER root against any American when the competition is from another country.  Yet, so many Americans find it very easy do when it comes to supporting Venus and Serena Williams.  I have seen social media posts and articles where the comments are about their style of play, bodies and even their gender has been called into question.  However, American magazines are quick to say how beautiful Caitlyn Jenner is, really?  This is 65 year old man that changed his gender.  No woman and I don’t care how much surgery she has, is gorgeous and amazing at the age 65 in a mini skirt.

Americans root against the Williams sisters when they are the only people keeping American tennis on the map.  After Serena won her sixth Wimbledon title some idiot has the nerve to say she is built like a man and that’s why she won.  Really, just how stupid are some people?  Have these people looked at pictures of Martina Navratilova or Billie Jean King, neither one of these women were the most feminine on or off the court but they were amazing tennis player and that is what matters.  However, some people find it easy to make derogatory and/or demeaning comments about these amazing women.  Although Venus is not where she once was because of health issues she is still ranked number nine (9) amongst the ten (10) greatest female tennis players and I enjoy watching her and Serena play against and with each other.  America doesn’t even have a male tennis player to root for. The last real American tennis player was Pete Sampras.  Andy Roddick was a flash in the pan and was marginal at best.  The Williams sister are the truth and always have been but American papers, magazines and analyst don’t want to give them the accolades they truly deserve.

Set forth below are the ten (10) greatest female tennis players based on what they have accomplished in the tennis arena:

If Serena wins the U.S. Open next month, she becomes the third woman in history to win a calendar Slam and will tie Steffi Graf for the most Grand Slam titles of all time.  This will be a true accomplishment for America because no other female tennis player has accomplished this feat.  Steffi Graff and Margaret Court are the only women tennis players to achieve a calendar slam.

Americans it’s time for you to be real patriots and root for Americans.