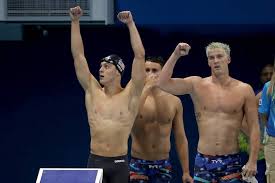 Oh, what a tangled web we weave; when first we practice to deceive, Ryan Lochte, Jimmy Feigen, Gunnar Bentz and Jack Conger. I will admit that when I heard all of the rumblings initially, I thought these were just some drunk swimmers out partying and celebrating after finishing their respective competitions and ended up getting robbed but downplayed the situation.  There were conflicting reports that said, they were robbed and others said they weren’t robbed.  Honestly, I said to the country of Brazil stop with the investigation nonsense because you know as well as I do that your country has a high crime rate and it’s very possible they were robbed.  I was throwing some serious shade at the Brazilian police, only to be proven wrong.

Needless to say, I was confused by the; they were robbed, they weren’t robbed dueling stories. However, now that the fog has cleared and the fact of the matter is Ryan Lochte and his compadres decided it was better to make themselves look good and make the country of Brazil look bad.  These are not children and Ryan Lochte is 32 years old and more than likely the leader of the pack and the creator of the lie that has infuriated the country of Brazil.  These grown “MEN” owe the country of Brazil an apology and the IOC should require them to do so.

This was just a bold face lie and it was told to save their own skin and public persona, I cry foul!!! The nerve of them to create a lie of that proportion.  It was bad enough to say they were robbed but for Ryan to say a gun was pointed at his head and the other swimmers were forced to lay on the ground shows a lack of integrity and blatant disrespect for the United States.  The US athletes have worked hard and have done exceptionally well for the country and to have these buffoons cause this kind of trouble infuriates me.

Can we say “shades of the black guy did it?” These entitled privilege minded white boys mentality must be put on blast.  These white boys need to stop lying and blaming other people for their bad behavior. They were drunk, made a scene at a gas station, damaged property and when the story was made public, in typical deflect fashion, they made up a lie and pointed the finger at someone else.  I am so sick of this behavior.  The media has vilified Gabby Douglas for her behavior but has tried to downplay this mess.  It’s the old “boys will be boys” excuse, well it’s not acceptable.

They may have held their hands over their hearts during their medal ceremonies but they showed no more respect for the country by lying and covering up their lack of respect for other people.