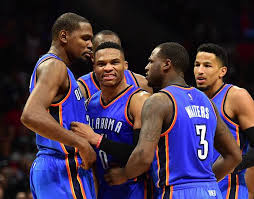 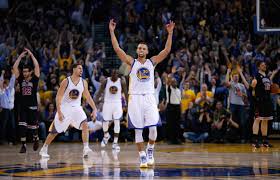 Some of you are wondering what I’m talking about when I say the four best teams to play in the 2016 playoff series.  Well, I’m referring to the Spurs, Thunder, Warriors and the Cavaliers. I’m going to analyze what happened to the losing teams and why Cleveland ultimately won.  By the way, I said from the onset of the series Cleveland would be victorious.

Let’s start with the San Antonio Spurs: The Spurs are by far the best coached team in the League.  One possible problem with the Spurs, could be age.  Tim Duncan is 40 years old and the average age of the players on the team with the exception of Leonard and Green is thirty (30).  Albeit, “age may not be a factor,” now, but not having replacements for Parker, Ginobili and possibly Duncan will be.  Ginobli is a “Swiss Army” knife and can make plays from anywhere on the court and Parker is a superior point guard.  The team’s success is the result of Pop’s coaching ability.  If the Spurs really want to compete for another championship they must find legitmate replacements for Ginobili and Parker.  Aldridge may or may not be the answer for Tim Duncan but if anyone can coach Aldridge to be the next Duncan, it’s Pop.

OKC Thunder: The Warriors were down 3—1 and came back from the brink of elimination to win the series in game 7, does that sound familiar? Unlike the conspiracy theories that are abounding about the Cavs comeback from elimination, the answer is actually pretty simple, Westbrook and Durant are young and still learning how to stay focused on playing four quarters of defense and trusting their teammates to get the job done as well. The Warriors should never have beaten the Thunder.  The Thunder had the perfect answer to the Warriors: height, long arms and superb defense until they started to breakdown mentally and didn’t remain focused on playing defense and not playing the Warriors game.  The goal to beating the Warriors is solid defense for four straight quarters, not playing the Warriors game of launching perimeter shots.  Once a team tries to keep up with Warriors, they are doomed for failure.  OKC did what the Cavs didn’t do.  OKC let up defensively and played the Warriors game, which ultimately resulted in their demise.  The Cavs continued the defensive pressure although they were down 3 – 1 and that made the difference.  The Cavs knew if they started launching 3s, the chances of winning the series would be “NIL.”  Cleveland was able to run with the Warriors because their defense gave them the ability to do so.

Golden State Warriors: How on earth did the Warriors lose to the Cavs after going up 3 – 1?  “Conspiracy Theorists,” let go, the game was not rigged.  No amount of bad calls by refs will breathe life into a team that is on the brink of elimination.  Not only that, the Warriors would have to be in on the rigging and  the amount of money that it would take to pull off something like that would break the bank so let go and move on.  The Warriors were beaten because King James and Company realized after game 4 that they had to play four quarters of defense, contest every shot, get every rebound, slow down the pace and not take perimeter shots unless absolutely necessary.  King James had more blocks, steals, assists and rebounds than anyone on the court.  That’s why he is King James.  The Warriors live by the 3-point shot.  Well, guess what? If you live by the 3-point shot, you will die by the 3-point shot and that’s one of the reasons the Warriors lost.  The Warriors had just come back from almost being eliminated by OKC and it took a lot out of them to fight their way back.  The Warriors don’t have an inside game which is problematic when the team is coming off a tough series.  Also, they did not have an answer for the defensive pressure applied by the Cavs.  King James running down the court and killing Iguodala’s layup was “priceless.”  The Warriors thought a swarm of bees had entered the building and they were being stung from all angles.  In addition to not having an answer to the defensive pressure, the time came for Steve Kerr to actually coach the team back and he wasn’t able to do that because the team relies so heavily on 3-point shots.  The players were tired so the “splash brothers” perimeter shots weren’t falling and if they tried to drive inside, King James and Company were there to contest every shot.  The inside pressure was so suffocating that Steph was afraid to drive inside.

Cleveland Cavaliers:  How did they come back from the brink of elimination and WIN. Defense, defense, defense, King James and Kyrie Irving.  Also, “The Will must be stronger than the Skill.” — Muhammad Ali.  The Cavs willed themselves to win and there was no stopping them.

Marinate on the above and let me know your thoughts. 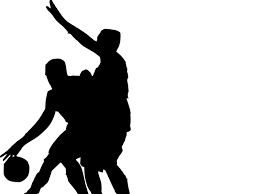 Basketball Fans, 1RAREGRL is going out on a limb to say, if the Cavs win game 6, they will win the Championship series. I know most people are shaking their heads going, “NO WAY” but in most instances I love to root for the underdog.

As I said in my last blog, I don’t dislike the Warriors but my Muse does. I have the utmost respect for the Warriors and they have earned it.  They are hardworking young men and they play to win.  The reason they win is because NBA teams have gotten away from the core formula for winning and that’s “DEFENSE.”  Defense wins games and the lack of defense exhibited by NBA teams just hands the Warriors wins on a constant basis.  When teams become frustrated with the Warriors perimeter shooting they shut down or try to keep up with them, WRONG ANSWER.

Instead of trying to keep up with the Warriors power house shooting, SHUT THEM DOWN and the only way to do that is to pressure them defensively. What happened to trapping the other team when the ball is being in bounded or half court traps and double teaming the opponent?  Come on, where is just old fashion coaching?

If the Cavs are going to hoist the championship trophy for the city of Cleveland, defense will be the weapon needed to get to job done. Also, Coach Lue will have to allow LJ to be LJ.  Irving, Love and everyone else on the team must accept who LJ is and play with him not against him.  Take a page out of the Warriors playbook and play as a team, not as a one man show.  Basketball is a team sport so play like a team, don’t play the Warriors game, play like a team hungry for a win. 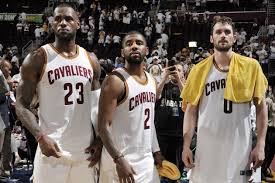 GET UP AND PLAY

The above-referenced quote from Muhammad Ali is poignant for what is happening with the Cavaliers during this playoff series.  I have to digress for a moment:  People are of the opinion that I don’t like the Warriors because I’m not rooting for them to win the NBA Championship and that’s not the case at all.  I enjoy watching the Warriors; they’re a fun team to watch with great players.  For as much as I like the Warriors, MY MUSE HATES THEM!!!!

The truth is, I am a Lakers fan and always will be. I don’t care who the reigning championship team is.  If the Lakers are NEVER on top again, I will always support them regardless of where they are in the standings.  Therefore, I don’t have a horse in the race for any other NBA franchise.  However, there are other teams that I’m partial to and the Cavs for sentimental reasons happens to be one of the teams.

Back to the Cavaliers and what is transpiring in this series. LeBron almost single handedly defeated the Warriors last year but what I’m seeing in this series is frustrating and increasingly more difficult to watch.  Coach Lue’s substitutions have been awful throughout the series.  The defense is horrific and that’s what the Warriors were counting on.  The Warriors win because the opposing team cannot play four quarters of good, solid defense and in the case of the Cavaliers they have had turnover, after turnover, after turnover.  Wait: I saw LeBron slip down twice in two plays, really?  Get a new pair of sneakers or the refs need to cleanup the wet spots.  The Cavs players are standing around as if they’re in shock by what’s happening on the court and it makes no sense.  The Cavs are the Eastern Conference Champions for the second year in a row.  How are you shocked by what’s going on, on the floor?

The biggest problem with the Cavs is not allowing LeBron to take over the game out of the gate.  If LeBron is given the green light to come in the game throwing his BIG body around, crashing the boards and forcing shots it will take the Warriors out of their game and allow the rest of the Cavs team to become involved in the game.  LeBron has never been a selfish player but it’s time for him to take on a more selfish role, if the Cavs are to have any hope of pulling this out.  He has got to put the team on his back and force the Warriors to play out of their comfort zone.

I hate to keep repeating this but Magic, Bird, Jordan, Zeke and Kobe would have placed their respective teams on their backs and willed a win. Coach Lue must allow LeBron to take over and his teammates must let go of their egos and focus on winning and being champions, not individual accolades.

MUHAMMAD ALI WAS KNOCKED DOWN AND SOME MATCHES HE SHOULD HAVE LOST BUT HE WILLED HIMSELF TO GET UP AND WIN.  THE CAVALIERS NEED TO DO THE SAME!!!!