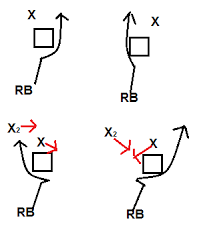 RETURN OF THE RUNNING BACK, YES!!!

This has been an interesting six weeks of football. There are two teams that are really standing out and they are the Vikings and the Patriots.  I will give more kudos to the Vikings because Coach Zimmer hasn’t been the head coach for very long but he has done a great job with the team after losing the starting QB to a very serious injury during the preseason.  As for the Pats, one word – Belichick.

Broncos vs. Chargers: Chargers won 21 to 13.  The Chargers defense showed up, which has been uncommon.  The Chargers had more rushing yards than receiving yards.  Teams need a running game.

Eagles vs. Redskins: Redskins won 27 to 21. Matt Jones rushed for 134 yards and that’s what made the difference, not Cousins.

Browns vs. Titans: Titans won 28 to 26. The Browns just have to find a way to win.  They’ve lost some really close games so it’s a matter of figuring out what’s missing.

Ravens vs. Giants: Giants won 27 to 23. Does anyone really care?

Panthers vs. Saints: Saints won 41 to 38. The Panthers have gotten away from what made them so successful last year, DEFENSE.  Go back to being a defensive unit and things will change.

Steelers vs. Dolphins: Dolphins won 30 to 15. The Dolphins beat the pants off the Steelers and it was because of their running game that was a good change in their offense.

Chiefs vs. Raiders: Chiefs won 26 to 10. I have told people to stop saying the Raiders are back because they’re not.

Falcons vs. Seahawks: Seahawks won 26 to 24.  Seriously, the ref should have called pass interference on Richard Sherman but he didn’t that’s why the Falcons lost.

Cowboys vs. Packers: Cowboys won 30 to 16.  The media is beating up on Aaron Rodgers but actually, more credit should be given to the Cowboys strategy.  The Cowboys rookie running back and rookie quarterback proved to be too much for the Packers.  The Packers didn’t have an answer for the Cowboys running game.

Colts vs. Texans: Texans won 26 to 23.  Osweiler must have heard Rodney Harrison, who is a complete idiot say “he was trying hard not to say that Osweiler is a bad QB or football player.” Well Brock showed him.

Jets vs. Cardinals: Cardinals won 28 to 3. When Fitzpatrick was holding out for more money last summer, I said the Jets should let him go because he was a flash in the pan.  Geno is starting on Sunday.  It’s important not to listen to players on the team like Brandon Marshall because he is a player on the team and an employee, not the head coach.