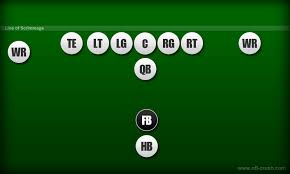 BRING THE FULLBACK BACK TO PROMINENCE

The media would have fans believe that people are not watching/attending football games because Kaepernick and other players in the league are kneeling during the National Anthem.  Please, the National Anthem only last a few minutes and most fans are not sitting around their television sets watching the National Anthem being played.  The truth is the games are boring because the coaching is bad, the play calling is awful, the commentators are horrible, tickets, parking and food are too expensive.  Also, DirectTV is the only game in town to see all of the NFL games and it’s becoming too expense as well.

Why are football games so boring?  The game turned into a quarterback one dimensional game with QBs and coaches being changed out every couple of years because teams are not winning with that formula. Two key positions that are critical to the success of a team is the running back and fullback.  These two positions are not valued as much and for some teams no longer part of the offensive strategy.  Thankfully, we’re seeing a resurgence of the running back this season and it’s been a pleasure to watch.  The flip side of that however, is the position of the fullback which has been completely destroyed and has resulted in the game being destroyed.  Those of you reading this blog, please don’t confuse the running back with the fullback.  I know it’s been awhile since the fullback position has been a topic of conversation but it’s time to talk about the importance of this position and the need for it’s return.  The fullback position, although an offensive role, it’s also the second line of defense for the quarterback and the running back.  When a team has a strong fullback, like Daryl Johnston or Tom Rathman, pressure is taken off the QB, the running back and the offensive line.

Removing the fullback position has made the game less exciting and it has created instability in the league.  It is my opinion that the fullback position is a critical role that needs to be returned to prominence.  The fullback plays two key roles, one is blocking for the QB and the running back and the fullback can run the ball as well.  If teams have a good running back and fullback the offensive options can be limitless.  Picture this, a mobile QB, a good running back and a good fullback this combination can keep the defense guessing what the next move is.  Commentators talk about the “West Coast Offense” and how great this spread out offense is.  Newsflash, when Joe Montana was running the “West Coast Offense” he had Tom Rathman blocking and running for him which was instrumental in the 49ers championship success.

The NFL didn’t do a smart thing by placing all of the pressure on the QB to throw the ball down field and rack up points. That has become stale and fans are no longer interested in watching games where the game is won by the team that has a lot of touchdowns.  Fans are being subjected to mindless football where there is no strategy being executed.  Instead we’re subjected to mindless commentators yammering on about how it’s the QB’s fault that the team is not winning.  Teams are not winning games because the offensive strategy is too one dimensional.   There was a time when teams had have several weapons to go to and the QB was just one of them.  College games are more interesting because the coaches have the talent to make adjustments.

Case in point, when Jalen Hurts, the freshmen QB for Alabama, ended up at Alabama, Coach Saban told him that he would teach how to be a pocket QB.  Well, guess what, Coach Saban didn’t force Hurts to stay in the pocket, he adjusted his offense to Hurts strengths and developed the team around him.  That’s great coaching!!!!

The NFL has allowed high schools and colleges to dictate the type of players that are being hired in the league.  The fullback position doesn’t exist in high school or college any longer, which is a shame.  NFL teams need to get back to the game of football and stop allowing the media and money to dictate the game. Bring back the fullback position and pound the football down the field.