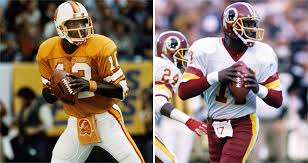 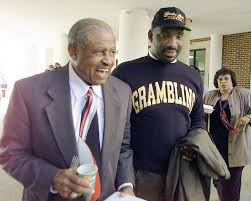 As an avid football fan, and graduate of Grambling State University, I am hereby nominating Doug Williams for consideration to be inducted into the Pro Football Hall of Fame.  My decision to nominate Doug Williams was based on a number of factors.  I am aware that each nomination is carefully reviewed by the committee to ensure that the person being nominated has “strong” credentials representative of the time the person spent in the League.  That being said, it is my belief that in some instances, consideration should go beyond the numbers on a page and that’s why I’m nominating Doug Williams.  Doug Williams should be inducted into the Pro Football Hall of Fame because he changed the game and he provided a point of reference for other young African-American men dreaming of becoming an NFL quarterback.

When Doug was drafted in 1978 by the Tampa Bay Buccaneers, who didn’t become a football team until 1976, he was only the second African-American quarterback to be drafted by an NFL team, which was nine (9) years after James “Shack” Harris, another Grambling football player, was drafted by the Buffalo Bills in 1969 to be an understudy.  Doug’s contribution to the game of football goes beyond “the numbers on a page,” which is based on what the player accomplished on the field.  Doug showed strength and perseverance in the face of adversity.  When he was drafted in 1978 to be the “starting” quarterback, not an understudy, for the Tampa Bay Buccaneers he was only paid $120,000, which was well below what other white starting quarterbacks and twelve (12) backups were being paid.  In that season he took a hit that resulted in a broken jaw that caused him to be out the remainder of the season.  As with most quarterbacks he focused on his health and was ready to return the following season.  Coming off of a broken jaw in 1979 he lead a very young Buccaneers team to its first NFC Division Championship but lost the Conference Championship to the Los Angeles Rams, ironically, the team James “Shack” Harris was the starter for nine (9) years earlier.

Doug was the starting quarterback for the Buccaneers for five (5) seasons and of those five (5) seasons the Buccaneers made the playoffs three (3) times and that speaks volumes in my mind. After the 1982 season Doug asked for a raise that would give him a salary of $600,000 which Coach John McKay championed for but management refused to budge from their meager offer of $400,000, which resulted in Doug leaving the NFL and going to the newly formed United States Football League.  As a result of Doug’s departure the Buccaneers didn’t see another playoff season for fourteen (14) years.  Clearly, Doug as the starting quarterback for the Buccaneers made a difference and without him the team took a nose dive.

Coach Joe Gibbs recruited Doug to the Washington Redskins in 1986.  Coach Gibbs was familiar with Doug’s talent because he was the offensive coordinator for the Buccaneers when Doug was drafted.  As a result of Coach Gibbs belief in Doug’s abilities, Doug became the first African-American quarterback to start in an NFL Super Bowl.  As you may recall, the Washington Redskins were not considered to be the favorite, the Broncos were highly favored to win the Super Bowl under a very capable John Elway.  I recall this moment like it was yesterday, Doug went down and his leg was bent backwards and as a result he was taken out of the game for one play.  When he returned to the game, the lights went out on the Broncos.  He became the “first” quarterback in Super Bowl history to pass for four (4) touchdowns in a single quarter and four (4) touchdowns in a half.  He was the “first” quarterback to throw an 80-yard touchdown pass in a Super Bowl.  He set a Super Bowl record of 340 passing yards and he rallied the team back from a 10-point deficit, the largest at that time and scored 42 unanswered points, which may still be a Super Bowl record.  In addition to his record setting Super Bowl, it was capped off with him being named MVP.  Doug was the “first” African-American quarterback to be named MVP and he retains that title today.

Doug Williams epitomizes what the Hall of Fame is about and that is determination, the pursuit of excellence and a willingness to win.  Its Doug Williams shoulders that every African-American quarterback coming into the League after him has been standing on because he set the standard for them to follow and improve upon.  He showed them that through adversity and challenges, you can still come out a winner if you’re willing to work hard and give 100% no matter what the circumstances are.

As the committee goes through the selection process of approving the players for the 2018 Hall of Fame, keep in mind that the Buccaneers were a newly formed team when Doug was drafted and they were still trying to build a program.  Doug’s numbers represent a quarterback playing for a new team that had no idea about the importance of surrounding the quarterback with a strong offensive line, so that he wouldn’t be pounded more often than not.  His numbers do represent his willingness to win and his ability to win in spite of the situation.

Doug Williams Stats: The Numbers on a Page