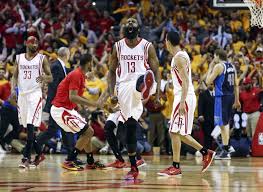 Wow, the Houston Rockets just ran out of steam in game 4.  I watched the game truly perplexed that Kevin McHale used the “hack-a-Jordan” as a strategy for the game.  It did not work when teams used it against Shaquille O’Neal and it’s not going to be a viable formula against the Clippers.  The Rockets were completely out of synch and fouls became the norm.

They were not getting rebounds or second chance shots after missed shots off the backboard.  The Rockets are a better team than what we’re seeing in this playoff series.  If they want to win game five, focus on more touch passes and getting the ball in the hands of someone other than James Harden.  At times during the game, it was as if James Harden was the only player on the floor.  James Harden is amazing but in order for the team to win games the entire squad has to be involved in the game and that’s not happening.

I can’t stand when a player takes the ball and dribbles all over the court instead of passing it around and trying to get the best shot.  James Harden, stop doing that and get your teammates involved.  That would be okay, if his dribbling and shooting garnered more than 26 points.  No one on the team scored more than 12 points with the exception of Dwight Howard, who scored 16 points, BOO!!!

Dwight Howard, Dwight Howard, Dwight Howard, what can I say except he is just not well respected by his peers and that’s unfortunate because when they start jawing at him on the court he becomes unglued and unable to focus.  He was ultimately ejected from the game, which I didn’t agree with.  I don’t believe players should be ejected from the game during the playoffs because tempers are flaring and the level of competitiveness is at an all-time high.  There needs to be more flexibility with the rule on ejecting players.  Unless, it is a bench clearing brawl, let them play!!!