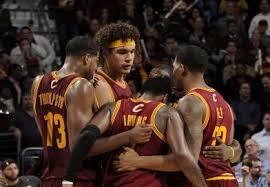 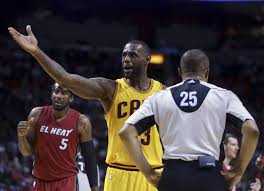 The Cavaliers management thought changing coaches would positively impact the Cavaliers ability to win a championship.  Coach Lue and David Griffin, the Cavaliers GM had a meeting with LeBron about his behavior with Dwayne Wade during halftime at the Miami game in March, which the Cavs lost by the way. Apparently, LeBron’s behavior was inappropriate and totally unprofessional.  Instead of warming up, he was chatting it up with D. Wade.  After his meeting with Coach Lue and David Griffin, he apologized and said that he needs to do more as the team goes into the post season, DAH!!!!

By chatting it up with Wade when he should have been warming up reflects that he’s not truly committed to the Cavs. It is saying that he doesn’t have to be in Cleveland next season and that he can go and play somewhere else, which is true.  However, a real leader shows that he’s 100% “all-in” for the team and nothing and nobody can change that.  He uses his abilities to hold the team and Cavs management hostage and it’s detrimental to the team.  His behavior is very nomadic, which has a negative impact on the entire organization.

Fast forward to the Cavs loss to Chicago on Saturday, April 10th.  There is no way the Cavs should have lost to Chicago.  My expectation for LeBron is that as the leader of the team, he should be able to lift his teammates to higher heights and win games against a team like Chicago.  Let’s dial back the hands of time for just a moment, Magic Johnson, Michael Jordan, Isiah Thomas, Larry Bird etc. would not have allowed the Cavs to lose to the Bulls if they were the leaders of the Cavs.  The mere fact that LeBron was more interested in chatting it up with D. Wade instead of warming up in Miami, speaks volumes to his lack of leadership.  The players that I just mentioned would NEVER have displayed that kind of behavior during a game.

I like LeBron and would love to see him win a championship with the Cavs but unless he develops a leadership mentality that his teammates can buy into, the Cavs will not win a championship with him as the “quasi” leader of the team.   Based on how Coach Lue handled him after the Miami incident, it is clear that the teamed needed someone who is not afraid to tell LeBron to get his act together.   There is an old saying that LeBron should heed and it is: “you can catch more flies with honey than you can with vinegar” because right now his behavior is all vinegar.  Kudos to Coach Lue.

Since he enjoys fraternizing with D. Wade so much, D. Wade should tell him the story about the time, Shaq and Alonzo Mourning picked him up and drove him around and talked to him about the importance of taking a leadership role on the floor so that Miami could win a championship. As a result of that talk, D. Wade developed into a leader on the floor and helped lead Miami to its first championship.  If this is lie, Shaq, D. Wade and Zo told it.  I’m merely recalling an interview I saw after Miami won the championship.

Food for Thought LeBron:  Your marketing firm dropped Johnny Manziel because it was determined that his behavior was not good for your “brand.”  Ask yourself if your behavior is good for the team.  You have got to learn how to be a leader that motivates your teammates to win at all cost.  You possess a lot of great qualities but you need to strengthen your leadership skills.  It can’t always be about you “baby boy.”  LeBron stop using your talent as a way of keeping your teammates and management guessing as to whether you’re truly committed to the team.

It is time for LeBron to be 100% all-in and step up to the plate and display real leadership skills. #1raregrljustsaying